With great excitement, 8 of our children took part in the Bath and District Year 3 and 4 Tennis Competition held at the Sport Training Village, Bath University. Team Murray (Esme, Kou, Jemima and Jem) played some energetic and tightly contested single matches and then went on to enjoy a doubles game. Team Williams (Alec, Ada B, William W and Isla) found their glory in the dizzying heights of a semi-final match! We had some really confident and experienced players amongst our group, they should be really proud of the tennis skills they have acquired so far. Equally impressive though, were the players that felt unsure about this new experience and yet were prepared to have a go and learn about how it feels to master a new challenge. You should all be really proud of yourselves! Thank you for a lovely afternoon. 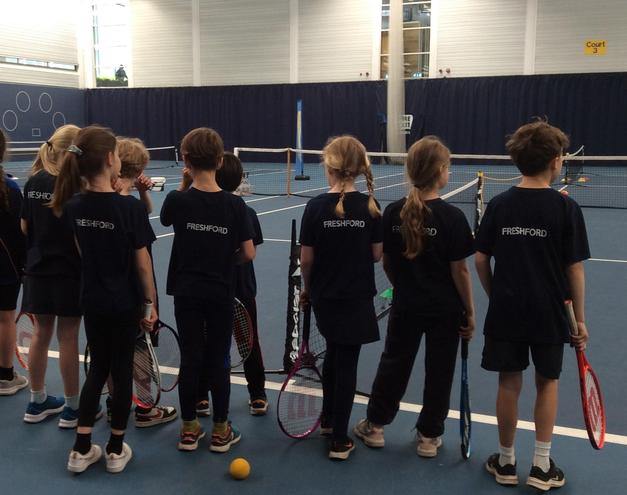 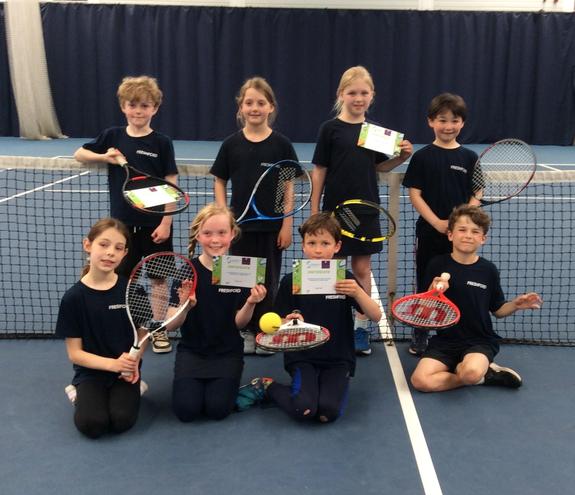 Last term, whilst getting to grips with our big question ‘Is our world a good place to live?’, Ashe Class made plenty of discoveries about plant growth. They looked at water cycles, soil components, the functions of the various parts of a plant, optimum conditions for plant growth and so much more. The culmination of their work led them to creating some detailed topic pages in their wider learning exercise books, planting up their garden and designing some wonderful posters and leaflets to inform about their garden.
The garden is now ready to be enjoyed and Ashe class parents came along on Friday to have a look around. The class shared their work and everyone enjoyed a sample of some of the food that the garden will produce over the next few weeks. 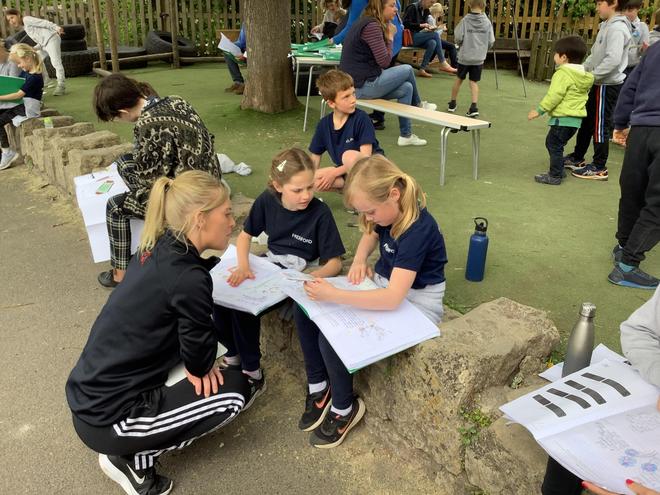 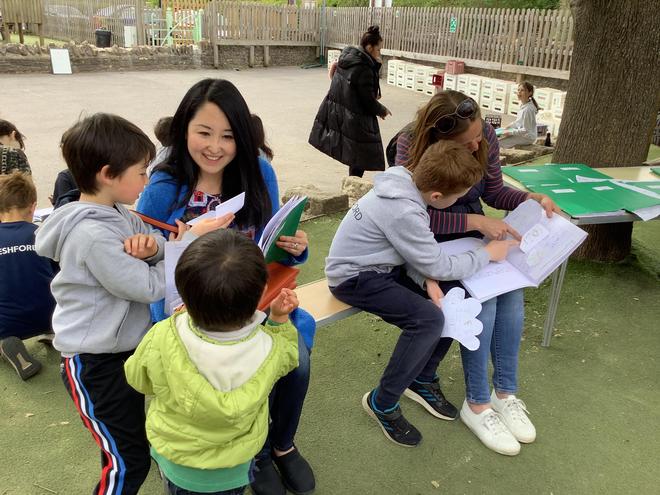 Twenty-six children submitted their creative writing poems and stories in the Creative Writing classes of this year’s Festival.
The Chair commented on the high standard of entries received from Freshford this year.
Penelope and Jacob came first in their class, achieving Distinction with 91 and 90 marks respectively, with further Distinctions
being awarded to Amelie, Albert and Eli. These were phenomenal results.
Huge congratulations to all those who submitted so many imaginative and enticing entries.

Against all the odds, with many having been absent with COVID, sixty of our children, from Yr 1 to Yr 6, participated in this year's Mid-Somerset Festival Verse Speaking competition on Tuesday.

For many, this was their first experience of performing in a public forum, in front of a large audience; the children's sheer joy and sense of achievement was testament not only to their own determination, but also the warm encouragement and inspiring feedback from the adjudicators.

Huge accolades to those for whom this represented a significant challenge but had the courage to complete their journey, congratulations to those who were placed first, second or third in their individual classes and a special mention to William and Amelie Childs who won the Northover Cup and The Whiting Challenge Trophy respectively.

It was such a shame that a small number of children were unable to share the experience due to self-isolating... you were missed!  Many thanks to Helen who came to school regularly to coach the children and prepare them for the competition.

What an action-packed sporty week we have had at Freshford! After far too long a break, Freshford sports teams have been competing against local schools in two competitions—Netball H5 and RFU Tag Rugby. It was wonderful to branch out and meet some fellow primary school teams, understand how to win and lose well and most importantly, work on some fabulous team work skills. Congratulations to Amelie C, Elsie W, Mimi, Maya, Bella, Freya and Mabel for your netball skills on Tuesday.
On Thursday, we were represented in the Rugby by Amelie G, Isaac, Mila, Hector, Arte, Henry, Raff, Patrick, Scarlett, Duncan, Harry and Jude. We really couldn't be prouder of your performances—Go Freshford! 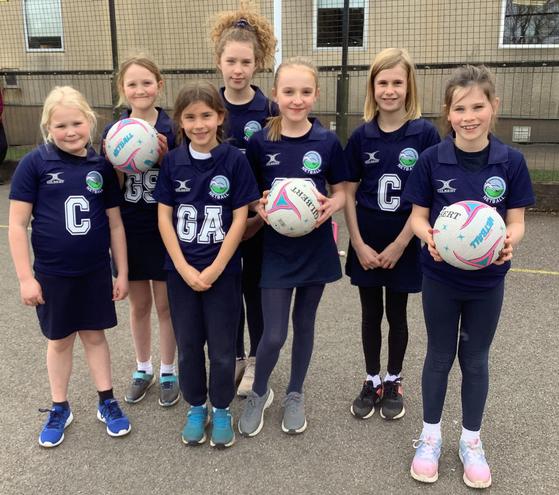 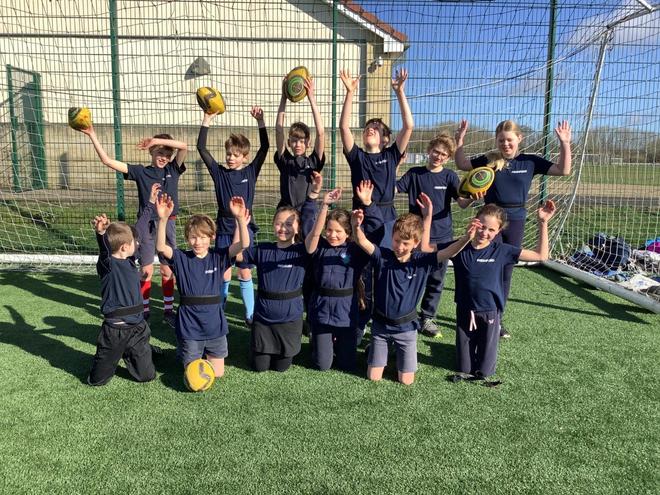 On Tuesday, 8th March, Freshford KS2 choir spent the morning in Bath Pavilion, taking part in the prestigious Mid Somerset Festival Choir competition. They sang in two categories: Free choice and the Rounds class. Their performances were excellent and all the singers looked confident and happy. The adjudicator even mentioned how everyone was smiling and how much they had enjoyed their singing. We were awarded a Commended certificate for both categories and came back to school feeling very proud!
Congratulations to Kate for being awarded the Chairman’s Award (Mary Whittle Cup) for her amazing contribution over the years.

Our LEGO robotics club competed in the First LEGO league Challenge - IET FIRST® LEGO® League ( IET FIRST® LEGO® League (theiet.org)), which is a global schools' competition designed to stimulate an interest in STEM subjects in young people aged 9-16 years old.
Two teams (Combat Wombats and Crispy Bacon) from our school entered the competition in which they had to work together to explore a given topic and design, build and program an
autonomous LEGO® robot to solve a series of missions.
Over 100 countries every year and thousands of school teams spend months working on both their robot and innovation project.
Both teams from Freshford Church School were successful in the regional finals and were invited to attend the national competition last weekend. The two teams were amazing, and our Crispy Bacon team won the national final - they have now been invited to attend the world final being held in Texas, USA in April 2022.  If you know any companies that may be interested in
sponsoring the children to attend the event please contact the school office.
Congratulations as well to Clive who won the Team Coach Award, Clive has run our Lego robotics club for many years and has inspired so many pupils along the way.  Thank you to Clive for all the support you have given the children, and thank you to Dan Towner, Caroline Ford, George Tomlinson and Amelia Pocknell who have also supported the teams this year.

The First LEGO League is a global engineering competition for teams of up to ten 9-16 year olds. In over 100 countries every year thousands of school teams spend 4 months working on both their robot and research project presentations, which have a new theme each year.  Then, on the regional competition day, teams must present their research project and compete against other teams in intense 2.5 minute robot challenges, and the teams are also judged on their robot design and teamwork core values.

On Tuesday Freshford’s two teams boarded the 7am coach (kindly paid for by Intel) to travel to the regional event in Bristol. After a quick practise (and second breakfast!) it was straight in to the presentations, where both teams were suggesting their ideas to
reduce the highly polluting ‘last mile’ effect of deliveries on the environment (a subject which had been inspired by an interesting talk to the group by Vicki of Riverford Organic Veg Boxes).

Next was the robot challenge. Each team has three heat rounds of 2.5 minutes, during which their robot has to complete as many table-top missions as possible to earn points. Our teams coped with the intense pressure admirably and scored very highly against their (mainly secondary school) opponents – and both teams finished in the top 6 so were through to the quarter finals.

In the knockout rounds ‘Bacon Crispy’ performed very well to finish 4th in the semi finals. ‘Combat Wombats’ were one of only two teams to score over 300 points to take them into the final, but in the end were very closely beaten into 2nd place.  An amazing robot performance by both of our young teams, scoring much higher than many of the older secondary teams!

After showing the judges their robot design, and enthusiastically explaining what they had learnt during the after-school club sessions, it was time to let off steam with a conga dance of all the competitors and then nervously wait for the final awards. Based on their overall performance in all 4 of the day’s exciting activities Freshford’s teams were delighted to be awarded 2 of the 3 available regional champions awards, our best ever result!   Well done teams, you were absolutely amazing!
Click here to watch a video of the robots in action!

Finally a massive thank you to our parent helpers:  Clive Seager, Dan Towner, Caroline Ford, George Tomlinson and Amelia Pocknell who all helped run the after school club each week.  Thank you also for the financial support from Intel, who match fund Dan’s volunteer hours at the club and paid for the coach travel to the event. We truly appreciate Dan still continuing to help out at the club despite his own children having now moved on from Freshford to secondary school!

Unfortunately not the ones with chocolate chips.

Some cookies are necessary in order to make this website function correctly. These are set by default and whilst you can block or delete them by changing your browser settings, some functionality such as being able to log in to the website will not work if you do this. The necessary cookies set on this website are as follows:

Cookies that are not necessary to make the website work, but which enable additional functionality, can also be set. By default these cookies are disabled, but you can choose to enable them below: